Series / Keeping Up with the Kardashians 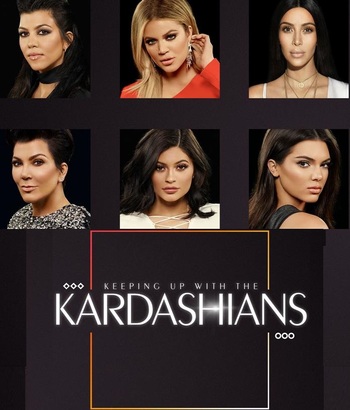 Keeping Up with the Kardashians is an American reality show that aired on E! from October 14, 2007 to June 20, 2021. Originated by Ryan Seacrest, the series stars the Kardashian/Jenner family: Kim, Kourtney, Khloé and Rob Kardashian, their mother Kris Jenner, their half-siblings, Kendall and Kylie Jenner, and their step-mother Caitlyn Jenner.note Caitlyn presented as male before coming out as a transgender woman in 2015.

The series focuses on the personal and professional lives of the family (focusing mainly on sisters Kim, Kourtney and Khloé), with the structure of a regular episode usually including the family exhibiting their privileged lifestyle and getting into one or several minor conflicts before ultimately making up in the name of family, with some Quirky Household antics along the way. If you haven't seen the show, you might have at least heard about it.

The show consistently received negative reviews from critics due to accusations of centering around people who are "famous for being famous", as well as some of the storylines being staged, and for the stupidity in the content, like most reality shows. In spite of this, KUTWK attracted high viewership ratings, becoming one of E!'s most successful shows, and nevertheless is considered a "guilty pleasure".