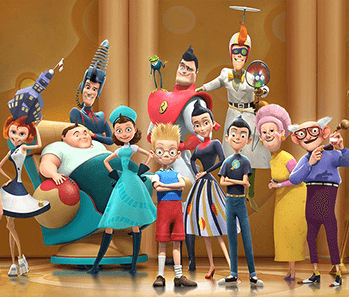 That's not even counting the robot, the rest of the frogs, and that Tyrannosaurus Rex they recently adopted.
"That was this family's speciality: strange conversations."
— Tomoya, CLANNAD
Advertisement:

Now remember, as far as anyone knows, we're a perfectly normal family...

An ensemble of bizarre characters who are related, or might as well be. Unlike the Dysfunctional Family, we as the audience plainly see the family is extremely well adjusted, supportive and loving — more so than some "real" families. They are also easily able to absorb friends, acquaintances, and distant relatives into their structure.

This is coupled with a range of quirks easily labeled "bizarre" by any of their peers.

It's also very convenient for heroes to have these, as they're not bound by the Masquerade, weirdness is normal.

May overlap with Creepy Family or Super Family Team. Likely part of the natural growth of a Pretty Freeloaders group. For a larger grouping, see Quirky Town, or Wacky Homeroom.