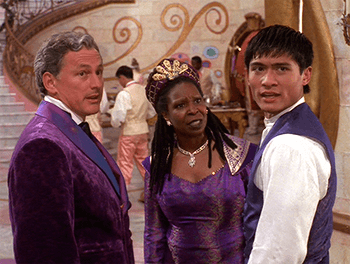 The King, the Queen and their son...
Advertisement:

Colorblind Casting (also known as Non-Traditional Casting) is where characters for a performed work (theater, TV, film) are cast without regard to race, gender, age, etc.

Most often this is seen when creating a new work. A character is created with a personality, but without defined physical characteristics, such as age, gender or race. This may lead to the inversion of some tropes related to age, gender, or race, but it isn't necessarily done intentionally. In some adaptations, this may lead to women playing parts traditionally played by men (when the gender of the character is not essential) or people of other races playing characters that may be associated with a different race.

Historically, this was far more common in theatre than you would believe. In the Elizabethan Theatre of Christopher Marlowe, William Shakespeare, Ben Jonson and others, it was common for actors to play both male and female parts,note This might explain the abundance of cross-dressing jokes in Shakespeare plays - cross-dressing was a matter of course for theater and having a man (the actor) pretending to be a woman (the role) pretending to be a man (some shenanigan the character gets up to) was guaranteed to draw laughs then as now since women weren't allowed to act on stage in this period. It was only during the Restoration that you had actresses playing female roles. In the 19th Century, with the greater professionalization of the stage, it was common for women to play male roles, such as when Sarah Bernhardt played Hamlet.

The rise of cinema and its greater emphasis on casting realism has also led to this trope being more common and invoked more often on stage. Though most plays don’t specify on what race the actors should be, they usually don’t take advantage of it. Theatre directors argue that the stage is fundamentally unrealistic as a medium. If an audience is being asked to admit that the proscenium contains scenes from Rome, Greece, Thrace, and other exotic settings, why not ask them to accept non-traditional casting, which would not be any less real? Likewise, with the development of international performance art, it is common in opera for singers, musicians and actors to be multi-national and multi-cultural as a result of greater inter-disciplinary and cultural exchanges.

Makeup doesn't come riding to the rescue as often as it once did, but it still turns up as a matter of course for "raceless" roles, such as those of animals or robots. It also provides a lot of leeway for casting actors as the ghosts of other characters, since everyone looks more or less equally pale as a corpse.

Compare to Ability over Appearance, where the casting department was looking for a specific race, build, gender, etc. but was swayed to change it by a desired actor's skill alone. See also Black Vikings, for characters of certain ethnicities that may or may not be out of place for a specific time period.