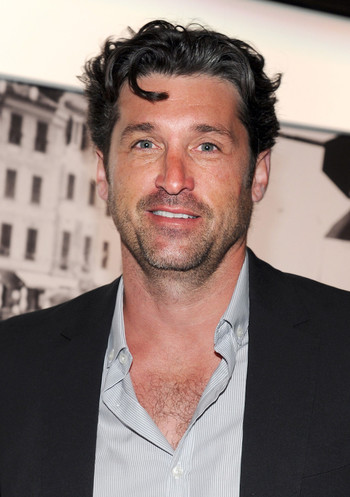 The man of your McDreams.
"When I left Maine, I always wanted to be a working actor. I never cared too much about being the star. I just wanted to do the work and get on with it."
Advertisement:

Patrick Galen Dempsey (born January 13, 1966 in Lewiston, Maine) was born and raised in Maine, has a lot of siblings, and was a championship juggler in his youthnote Seriously — he came second only to the guy who is now considered the best juggler ever. Which is something people have considered. His beginnings as an actor were in touring stage productions, first appearing in Torch Song Trilogy before getting the lead role in another tour, though perhaps most notable starring in On Golden Pond, and then he made it to off-Broadway before getting into film with 1987's In the Mood (starring alongside his then-wife, who was over twice his age). By the age of 21.

In the 1990s he moved into predominantly television work, though was not initially successful in this medium. After some starring roles, he was nominated for an Emmy in 2001 for Once and Again but moved back to movies, anyway. He starred — and still stars — in largely cheesy RomComs. He did pick up some television work, though, and in 2005 graced our screens as Dr. Derek "McDreamy" Shepherd, possibly his best-known role, in Grey's Anatomy, for which he won two SAG awards. He left the show in 2015, though his contract extended beyond this, but can still be seen in impressive roles. He also took up racecar driving in 2007, and has been doing surprisingly great (most recently placing second at Le Mans), as well as having two honorary doctorates (from Bates College, Maine, and Bowdoin College) and funding a cancer clinic (the Patrick Dempsey Center at Central Maine Medical Center). His Grey's Anatomy character also got his degree from Bowdoin and focused on cancer.

He has been nominated for a Razzie, too, though.