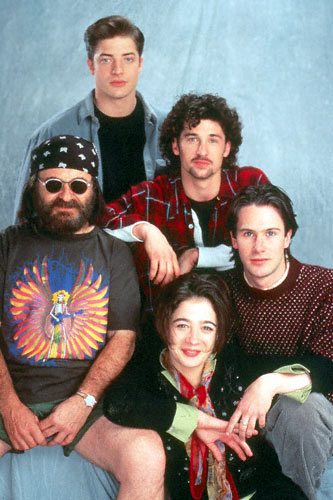 "If you want a degree go to Harvard. If you want an education...go to Simon Wilder (far left)."
"I'm a bum. But bear in mind that I'm a Harvard bum."
—Simon Wilder

With Honors is a 1994 dramedy film directed by Alek Keshishian, starring Joe Pesci and Brendan Fraser.

Fraser portrays Montgomery Kessler, an honors Government senior at Harvard University and pet pupil of the harsh Professor Pitkannen (Gore Vidal). Monty's rooms in a house with Courtney (Moira Kelly), an art student; Everett (Patrick Dempsey), a college radio DJ and legacy student; and Jeff (Josh Hamilton), a neurotic pre-med student. After his computer crashes, Monty loses the only paper copy of his thesis in a library boiler room. Attempting to retrieve it, he comes across Simon B. Wilder (Pesci), a homeless man who is living in the boiler room and burning the thesis. Simon extorts food and new underwear from Monty in exchange for pages of his thesis, but Monty instead calls security and has Simon arrested. In order to get his thesis back, Monty puts Simon up in a broken-down van in his backyard.

The film sees Monty become less cynical and ending up caring deeply for Simon, who, in turn, gives him advice on life, his thesis, and love while discussing his own failures.