Prepositions Are Not to End Sentences With 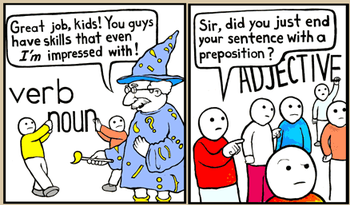 And so the false idol is dethroned.
"That is the kind of arrant pedantry up with which I will not put."
— Attributed to Winston Churchill, on being criticized for this.note A more commonly missed joke is that the speaker thought that "up" was used here as a preposition, so he erroneously put it in front of "which".
Advertisement:

A preposition, a specific type of adposition,

is a word describing a relationship between two nouns. These include words such as "on", "to", "beneath", "before", etc.

As noted in the link, the word is a lot more complex than it seems, and not every use of a word that looks like a preposition is one. But the most well-known thing about them is that you supposedly cannot end sentences with them (also known as stranding a preposition).

One oft-claimed source of this is some overzealous grammarians' attempts to apply Latin grammar rules to English, and while some of those can actually apply in the latter language (like no double negatives), this one doesn't (same with splitting infinitives, which is impossible in Latin). Many sentences just don't flow in English if this rule is shoehorned in, and evidence has been shown that ending sentences with prepositions has been in the language since Anglo-Saxon. Some grammarians analyzed other languages, even quite unrelated languages such as Irish or Scottish Gaelic, with models based upon Latin grammar, to various degrees of success and correctness.

A more concrete source of this grammar superstition is an English grammarian named Robert Lowth, who wrote the highly-influential A Short Introduction to English Grammar in 1762. He actually discussed, in his grammar, separating prepositions from the relative that they govern. He said that it was an idiom "which our language is strongly inclined to" and fit the "familiar style" but did not fit the "solemn and elevated style". In other words, his critique of this was based upon style, not grammar. Unfortunately, some teachers and grammarians probably misinterpreted this as an absolute rule, whence came the superstition. Lowth himself warned against overapplication of Latin rules to English.

In fiction, there are different reactions to this. The person who states the rule might be accused of being a Grammar Nazi. Or those called on for doing this might reply in a snarky manner, a common spin being repeating the sentence but concluding with an insult ("Where do you come from, bitch?"). Or those called on might instead try their best to avoid breaking this rule. Basically it's whichever is funnier.

If someone tries to call you on this, tell them that the Oxford University English Department says it's perfectly acceptable, and that you recognize no higher authority. And then say something that ends in "off".

Can often invoke In Which a Trope Is Described, the title of which is the pedant's version of 'a trope is described in'.