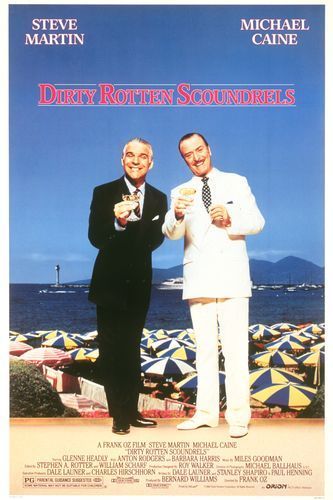 A 1988 comedy about con artists, directed by Frank Oz and starring Michael Caine and Steve Martin.

Lawrence Jamieson (Caine) is a sophisticated, cultured con artist who preys on rich women visiting the French Riviera, extracting large sums from them voluntarily by masquerading as an exiled prince who needs help to regain his throne. One day, he meets a less ambitious — and far less polished — con artist, Freddy Benson (Martin), who is conning women out of money for lunch and train tickets by masquerading as an impoverished charity worker. Worried that Freddy may interfere with his work after he sees a newspaper article describing the con-work of "The Jackal", and after attempting to train him in culture and conning, Lawrence makes a bet with him: The first of them to con a selected mark out of $50,000 can stay in the area, while the other must leave. The two decide the mark is to be the apparently wealthy socialite Janet Colgate (Glenne Headly). Various complications and hilarities ensue.

A remake of the 1964 film Bedtime Story, which starred Marlon Brando and David Niven. Became a Broadway musical (starring John Lithgow, among others) in 2005. In 2019, the concept was adapted with a Gender Flip into The Hustle starring Anne Hathaway and Rebel Wilson.