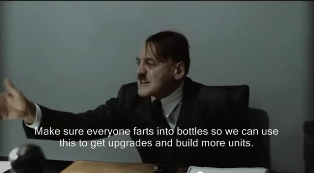 Hitler requires more vespene gas.note Actual Translation: "If he has gone AWOL, that's desertion!"
Gunsche: There is now a separate page for the Hitler Rants. Fegelein made the request to TV Tropes.
Hitler: I should have known that imbecile would find yet another way to make me look like a fool. And now he's done it! With a separate page for Hitler Rants, I'm FUCKED! I was hoping the Downfall page would bury all the antics that go on in the bunker. But no! Now bring me that asshole Fegelein!
Advertisement:
FEGELEIN! FEGELEIN, FEGELEIN!

The Hitler Rants (also known as "Hitler Reacts", "Hitler Parodies", or "Downfall Parodies") are Memetic Mutations involving fanmade series of Gag Subs involving Adolf Hitler and his famous freakout scene from Downfall (portrayed by Bruno Ganz), often ranting about several topics. Said rants are usually anachronistic, often over trivial matters and sometimes can even relate to current events of the time a video gets made, all for Rule of Funny.

There are thousands of videos out there, and they can use any part of the movie (or even clips from other movies), but the most common scenes used are Hitler planning a counterattack,

Hitler melting down while in his bunker upon hearing that Felix Steiner couldn't muster up that counterattack,

Hitler calling about artillery fire near the bunker,

Otto Gunsche informing him that Hermann Fegelein has gone AWOL,

or Hitler having dinner with some of his aides and learning that Himmler tried to have Germany surrender to the US behind his back.

The most commonly used scenes are actually rather early in the film.

The parodies were also adapted into video games

or Game Mods, also by Untergangers. Deadpool comics referenced this with Hitler complaining about Nick Fury.

For his part, the film's director, Oliver Hirschbiegel, likes the concept considering it furthers the purpose of his film of making the Nazis feel human and not just monsters one can dismiss as nothing like oneself.

Changing sociopolitical attitudes, YouTube's censorship of Nazi-related content and the retirement of prominent Untergangers have resulted in the meme declining in recent years, though there are some who are still dedicated to making Hitler parody videos to this day.

NOTE: Sort the tropes into one of these headings. If a trope is about a specific character, move it to the Characters sub-page.

Tropes about the parodies in general

Hitler Rants videos with their own page:
Feedback