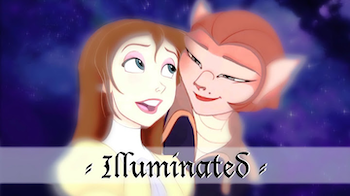 is a fanvid manip by YouTuber TheNamelessDoll. The video ships together Jane from Tarzan with Amelia from Treasure Planet. It is set to the song "Illuminated" by Hurts.

Jane is a young woman who wants to see the universe, so she decides to join Captain Amelia's crew as a map artist. The two end up slowly falling in love, but Jane's Dark and Troubled Past comes back to haunt them when her abusive ex-boyfriend Thrax (Osmosis Jones) catches up to their ship.