Web Animation / If the Emperor Had a Text-to-Speech Device 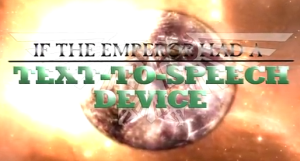 The Emperor speaketh about shit.
The Custodian: My divine lord, we have managed to implement a text-to-speech device to your glorious Golden Throne! Please, lord, speak to us!
The Emperor: [garbled noise] About fucking time.
The Custodian: At last! Our glorious lord can command us once aga—
The Emperor: I have so many things to complain about.
Advertisement:

If the Emperor Had a Text-to-Speech Device

(informally abbreviated to TTS by fans) is a series of web videos made by Bruva Alfabusa, asking the question of what exactly would happen if the Emperor of Mankind could ask about the current state of the Warhammer 40,000 universe. Hilarity Ensues as the Emperor proceeds to have some... colorful critiques about the universe as well as its numerous Retcons over the years, and begins some changes.

The story follows the Emperor as he tries to "unfuck" the galaxy, his personal caretaker "Little Kitten" (and later others) as the other half of a Double Act, and intertwined subplots such as the Inquisition trying to enforce their own martial law on Holy Terra. Initially, the series mostly focuses on a kind of "question per episode" format, with the Emperor as a Fish out of Temporal Water either asking or answering a question about the setting in rather colorful language (such as what the hell the Warp is), though slowly, the overarching plot begins to emerge. It's a very comedic take on the 40k universe, though itself can serve as an introduction to its complex lore.

Each season is composed of ten episodes. Season 2 has been completed with help from Karl the Deranged

. Season 3 began with a two episode premiere on March 3rd, 2016. In October 2017 the series saw a small spin-off called Brotrip 40,000 depicting the journey of Corvus Corax and Vulkan as they make their way to Terra, stopping to see the galaxy as they go. The series occurs in the same universe as Karl the Deranged's series "Chaos Descends" and Eliphas the Inheritor's trilogy "Behemoth

On July 2nd 2020, a new side series, called "WarHams", debuted following the adventures of four low-ranked members of the Bro Trip crusade, via games of Cubicle 7's edition of Wrath and Glory. Following Captain Zedek, the (incredibly alcoholic) leader, Reeb Van Horne, an Inquisitorial Acolyte, π-Braine, an Axe-Crazy Skitarii ranger, and Lorn, a half-senile Fenrisian sanctioned psyker, the quartet travels from planet to planet on their dubiously-reliable ship the Debt Collector, trying to gather resources and allies to fund the Crusade, in hopes of winning coveted "points" with their leader, the food-obsessed Minister Moderatum Katje Van Noord. This being the TTS universe, the WarHams soon find themselves in wacky adventures that they hope they can navigate successfully, and hopefully with all their limbs intact.

If the Emperor Had a Text-to-Speech Device provides examples of:

open/close all folders
Tropes A to M

Kitten as much admits he does have such fantasies, but that it is besides the point.

Tropes N to Z
WE ARE THE GODS OF THE NEW WORLD ORDER.
WE ARE THE SOLDIERS, THE LEGION OF LIGHT.
WE ARE THE CENTER, THE DEATH OF THE SUN. (SON)
FIRE AND FLAME.
WE ARE ONE.

The Emperor: What the fuck was that?
Feedback