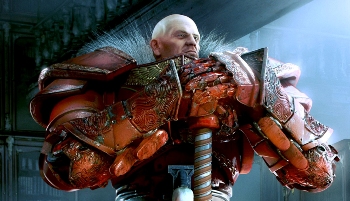 THIS... IS A LIE!!
"They say we live in mankind's last and darkest millennium. They say mercy is a weakness, that family is a burden, and that compassion is heresy. But who says these things? Who rises against the dying of the light? That... would be us."
-Marcus Allenbrisk
Advertisement:

The Lord Inquisitor is a CGI fan film, based on the Warhammer 40,000 Universe, developed by Erasmus Brosdau. The film will be centered on Lord Inquisitor Torquemada Coteaz, an Inquisitor of the Ordo Malleus, sent to investigate the planet Occulta Majoris, accompanied by his Acolyte Marcus Allenbrisk, and a squad of Grey Knights.

The film is slated to be around 40 minutes long and is set to be released in 2016, although there are no guarantees. Aaron Dembski Bowden, a writer from the Black Library, has been confirmed to write the story. Watch the first official trailer here

, and a teaser here

As of February 4th 2018,the project has finally been interred on the Golden Throne.

Due to the extensive amount of time and resources required for the project, "The Lord Inquisitor" has been shelved for the time being, with the author focusing on an original project called ORIGIN ZERO. However, all is not lost, as Erasmus has instead been working towards creating a studio of his own that could always work something out with Games Workshop in the future.