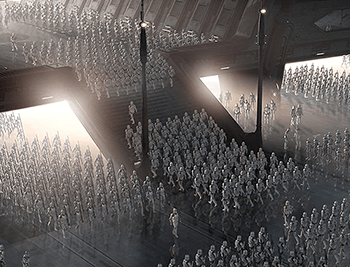 Magnificent, aren't they?
"The onset of troops is like the rush of a torrent which will roll even stones along in its course."
— Sun Tzu, The Art of War
Advertisement:

You've got a massive army at your disposal, but people need to see its size, not only to show off your power, but to hurt morale of anyone who stands against you. So you have them march, either in a straight line that takes all day, or massive formations that cover even the largest fields. Of course, The Empire can be expected to show this off.

Of course it's important that they actually fight well, and many Evil Overlords heed that advice, while the logistics of providing food and toilet facilities for such a huge army are usually ignored or Hand Waved. Also, doesn't work if the heroes are using a bottleneck, like a narrow bridge. Or, god forbid, a thin path between the mountain and the sea... In fact it's surprising how often this trope goes south.

Storious summons a large horde of Shimi to guard the outside of his tower.

Storious summons a large horde of Shimi to guard the outside of his tower.