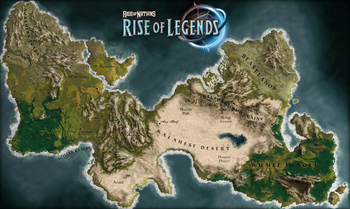 Rise of Legends is a Spiritual Successor to Rise of Nations created in 2006 by Big Huge Games, creators of the previous game. Instead of being set on Earth, it is set on the world of Aio, a world of technology and magic.
Advertisement:

The campaign follows the adventures of an inventor named Giacomo. On his way to recover a mysterious artifact for study, his brother Petruzzo is killed by the Doge, an archetypal Evil Overlord who wants the technology for himself. Giacomo begins a quest for vengeance against the Doge and finally has his revenge, though not before getting caught up in a struggle with mysterious creatures made of glass, which ends when Giacomo and his allies find their leader, a corrupted genie, and bring him back to the side of good. At this juncture it turns out that the Doge was merely a pawn of more powerful and terrifying entities, whose technology was also responsible for the corruption of said genie. Giacomo thus sets out to defeat them in turn, but things go decidedly bad for him in the process.

Gameplay-wise, Legends isn't expecially similar to Rise of Nations despite using its name as a prefix: Nations imported a lot of ideas from the 4X genre, a lot of which Legends discarded in favour of fast-paced RTS combat and resource competition, taking a lot of its ideas from StarCraft. Gone are the non-military win conditions, the emphasis on research, the proliferation of resources and the large roster of playable nations. Legends isn't a terribly ambitious product, but it's still very fun to play and has more strategy than many give it credit for. For instance, ships plying the enemy's trade routes can be shot down, slowing down their economy; cities are not founded but captured, either from other players or from neutral creeps; there are non-city "outpost" locations which you can gain control of and give you gameplay bonuses (in the form of resources or access to new units); and said neutral locations can be purchased as well as conquered, at which point its neutral creeps join your army.

The player has a choice of three different factions, each one a custom counterpart of the three races from StarCraft: