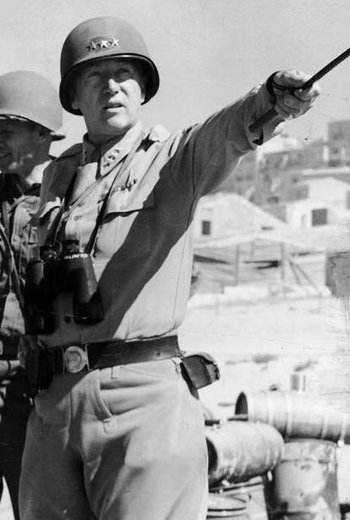 "Now I want you to remember that no bastard ever won a war by dying for his country. He won it by making the OTHER poor dumb bastard die for HIS country."
— First line of the film Patton

George Smith Patton, Jr. (November 11, 1885 – December 21, 1945) is one of America's most celebrated military officers and most notable of World War II, along with one of the most controversial.

Born in California, Patton came from a military family, with his grandfather having served for the Confederates during the American Civil War. He attended the Virginia Military Academy and West Point, Patton's first taste of fighting came during The Hunt for Pancho Villa, where he participated in America's first ever military action that used motor vehicles, and shot down three of Villa's men with his custom made ivory handled revolvers (it's not known if he got the kills as several other soldiers were firing as well, but he did definitely hit and wound all three of them). Afterwards, he served with the American Expeditionary Force in World War I as a tank officer.

Patton was also an Olympian Athlete who finished fifth place in the modern pentathlon in the 1912 Olympics in Sweden. Possibly he should have finished higher, as he ranked near the top in four of the five events but did poorly in target shooting which was expected to be his best activity. With five shots, only three bullet holes were made in the target - all three near the center and tightly clustered. He claimed, and may have been right, that his other two shots passed exactly through the holes from previous shots. Several competitors agreed, but there was no way to verify it either way, so the results stood. He also participated in swimming, shooting, fencing, and cross country riding.

When World War II started with the German invasion of Poland, the United States declared neutrality, but began a program of mobilization. Patton was placed in a position to oversee the strengthening of America's armor forces. Then came the attack on Pearl Harbor, which forced America to enter the war. It was decided that America would focus on Europe first, and the first step for that strategy was to help eliminate the North Africa front, which was in the midst of back-and-forth battles between Erwin Rommel and his Afrika Korps, and Bernard Law Montgomery and his 8th Army.

The US Army landed in Morocco as part of Operation Torch, which Patton helped plan. The combat debut of America was abysmal: their first major battle against the Germans at Kasserine Pass was a complete disaster. As a result, the US Army enacted a complete top-down reorganization of their forces, with Patton being placed in charge of II Corps. The Battle of El Guettar was much more in America's favor, and less than a month later, the North Africa Campaign concluded with the surrender of remaining Axis forces in Tunisia.

The next objective for the Allies was Sicily, as a stepping ground for invading Italy, during which he was placed in a supporting role to Montgomery thanks to the latter's machinations. The British 8th Army got bogged down, while Patton's 7th Army maneuvered across western Sicily through Palermo and then took Messina, the primary objective of the entire invasion. He was eventually sidelined by General Dwight D. Eisenhower for nearly a year however, due to losing his cool and slapping a pair of soldiers he accused of cowardice, who were suffering from what was then known as Battle Fatigue would would later be understood as Post Traumatic Stress Disorder.

The Germans had gained a great deal of respect for Patton as a battle commander and considered him to be a crucial element to the eventual invasion of France. By 1944, it was clear that the Allies were going to attempt a return to the continent; it was simply a question of where. The Allied Supreme Command, aware of this, placed Patton in command of the fictitious First United States Army Group, in order to give the impression that the Allies were going to land in Calais instead of Normandy. Once the landing and breakout at Normandy was a success, Patton was placed in command of the Third Army and began a relentless drive across France, striking too rapidly for the Germans to organize any defenses.

By the autumn of 1944, supply problems caught up with the Allies. They were advancing too rapidly and far ahead of their schedule; in September, they found themselves liberating towns they had not expected to reach until spring 1945. Montgomery attempted to accelerate the conclusion of the war with an ambitious airborne assault in the Netherlands called Operation Market Garden. Poor logistics and a refusal to believe credible intelligence reports of strong German forces on the British drop zones led to disaster and Allied priorities shifted to the Scheldt Estuary.

Recognizing that they were no longer defending all of Western Europe, and how poorly the Allies supply train supposedly was,* It wasn't so much that Allied logistics themselves were poor, they'd supplied the Allies this far, after all; the main issue was that the units at the very front lines of the operation were mainly paratroopers, who were geared more towards fast assault and harassing the enemy behind their own lines than holding frontlines themselves, and were not equipped to take a defensive stance against the enemy. This was compounded by the fact that many paratroop regiments were still recovering from their losses suffered during the abortive Operation Market Garden and were in the middle of trying to resupply and refill their ranks. the Germans attempted to launch an offensive in December 1944 through the Ardennes Forest, the exact same invasion route they took in 1940. At first, they were incredibly successful, routing newly arrived American G.I.'s. However, at Bastogne, one of the major town to the German objective of Antwerp, they ended up facing elite American airborne divisions, including the 101st "Screaming Eagles," which were resting in the area. Patton saw immediately what was happening and took his Third Army, which was already heavily engaged 100 miles to the south, to relieve the paratroopers at Bastogne. Disengaging the majority of his force and reorienting it for a forced march over what could only be called "roads" in the most generous sense of the word amid one of the harshest winters in Europe's history, while still keeping the Germans to his front tied up and unable to move, attacking the main German force in their flank, and relieving Bastogne before the 101st Airborne and remnants of the 10th Armored Division were overwhelmed is rightly considered Patton's greatest achievement and one of the most brilliantly-executed operations in history. This ended up tapping the Germans of their remaining reserves and in May 1945, Berlin fell to the Russians. The war in Europe was over.

After the fighting, Patton was appointed to be military governor of Bavaria, which was within the American occupation zone. Throughout his career, he was a staunch anti-communist and believed that a war against the Russians would be inevitable. He famously made comments that he would rearm the defeated Germans in order to fight their "true enemy." Naturally, none of the Allied Supreme Command had any stomach for starting World War III when World War II was still settling down, and so he was relieved of his current posting and placed in command of the Fifteenth Army, who sought to compile a complete history of the war.

While he took the command due to his love of history, he soon grew dissatisfied with it. He decided that upon taking his Christmas leave, he would not return to Europe again. He intended to either seek a command stateside, or retire from the army altogether. Unfortunately, this posting would be Patton's last.

On December 8, 1945, only eight months after the end of the war in Europe and two days before he was due to go home on leave, Patton was involved in an automobile accident while travelling with another general. Despite the crash being very low speed and the other occupants of the crash getting out unharmed, Patton complained of paralysis and trouble breathing; It would later be revealed he suffered a serious compression fracture and injuries to his spinal cord that left him paralyzed from the neck down. He would die 12 days later of heart failure, his last words often attributed as being, "Hell of a way to die." Rather than being returned to the U.S. for burial, he was buried with the wartime casualties of the Third Army at the Luxembourg American Cemetery and Memorial, per his request to be buried with his men.

Much is often made of the supposed rivalry between Patton and the commander of German troops in North Africa, Erwin Rommel. In truth, Patton and Rommel were never opposing commanders in battle in either Tunisia or France, not to mention Rommel was always at least one rank above Patton. The same is true for Montgomery; after Sicily, Montgomery was the equivalent of a 4-star general in command of all land forces in Normandy. In September 1944 Montgomery was promoted to 5-star rank, but relinquished overall land forces to Eisenhower - but remained an army group commander while Patton was one level below, a 3-star general (until April 1945) in command of a single army. Their respective sons Manfred Rommel and George Patton IV had a much-publicized friendship which also included David Montgomery, son of Bernard Law Montgomery.