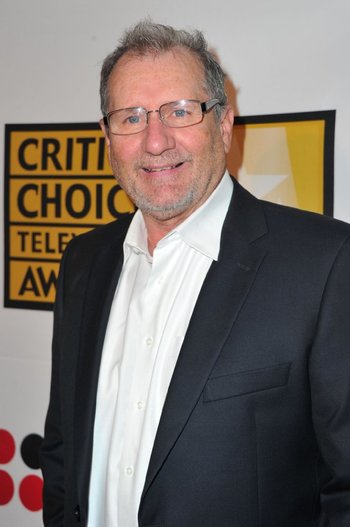 Marcy: But unlike evolution, I'm not letting you off the hook, Al. Now can you tell me what a woman's body has to do with selling beer?
Al: All right, number one - if it wasn't for beer, there would be at least three people who probably wouldn't be married - Me, Jefferson, and probably Lisa Marie Presley. Number two - since men buy beer, advertisers have to cater to what we want. And hold on to your corncob pipe - we like pretty women. Pretty women sell beer, ugly women sell tennis rackets. Pretty women - cars; ugly women - minivans. Pretty women make us buy beer, and ugly women make us drink beer.
— Al Bundy and Marcy Darcy discussing the finer points of Sex Sells, Married... with Children
Advertisement:

In addition to being a traditional actor, Ed has lent his voice talents to several animated productions:

Little known fact... Ed played college football (American Football) at Youngstown State and at Ohio University. He was drafted by the National Football League's Pittsburgh Steelers in 1969 to play defensive lineman but was cut during the training camp. This little fact was worked into the script of Married... with Children, with Al reliving his glory years as a champion high school football star and even saw Terry Bradshaw, Hall of Fame quarterback for the Steelers, making several appearances on the show. Another little-known fact: he holds a black belt in Brazilian Jiu-Jitsu, is good friends with the Gracie family, and is highly regarded in the martial arts community.