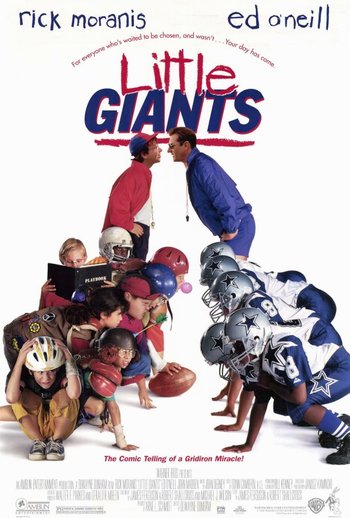 This is the story of two brothers, Kevin (O'Neill) and Danny (Moranis) O'Shea. One was blessed with the kind of raw football talent given to those who were born to bask in gridiron glory. The other... not so much. As the two grew up and made families of their own, Danny pretty much literally stood in the shadow of Kevin's legacy, with the town watertower looming over the city proudly displaying "Home of Kevin O'Shea."

When Kevin begins starting a pee-wee football team, he cuts several underperforming kids, including Danny's daughter Becky O'Shea (Shawna Waldron) who was one of the best at the tryout and was cut for being a girl. When the Cowboys try to bully the underdogs, Becky comes to their rescue and improvises the taught that they're forming their own team, coached by her dad. While both Danny and Kevin are incredulous at the idea, Kevin's condescension gets to Danny, and he and Becky decide to actually do it. However, league rules state a town can only have one team, so the two agree for their teams, Kevin's Cowboys and Danny's Little Giants, to play a game to decide who shall be the town's official team.

No relation to the Abbott and Costello film Little Giant, nor to anyone from Haikyuu!!, or the trope Large Runt.