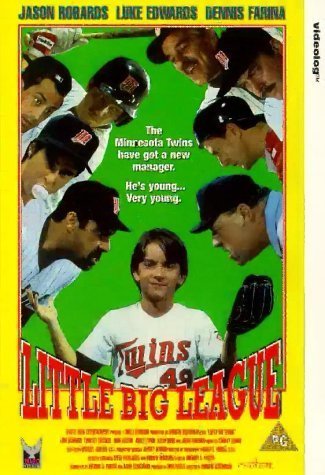 The Dream of Every 12 Year Old Kid
Joey: You should start Wedman. He always beats the Rangers.
Billy Heywood: He always beats everybody. That's why he's 3-7.
Advertisement:

A 1994 baseball film written by Gregory K. Pincus and directed by Andrew Scheinman. Young 12 year old Billy Heywood (Luke Edwards) is granted control as owner of the Minnesota Twins by his grandfather, who died and who owned the team. Billy initially struggles to relate and find his footing but soon rallies the team into a do or die game to make the playoffs against the Seattle Mariners. Also starred Timothy Busfield, John Ashton, Dennis Farina, Kevin Dunn, and Jonathan Silverman.