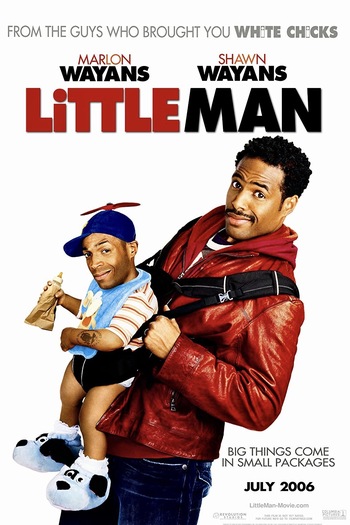 Little Man is a 2006 comedy film from the Wayans Brothers.

The plot centers around a diminutive criminal named Calvin Sims (Marlon Wayans) and his accomplice Percy (Tracy Morgan). After a diamond heist goes wrong, Calvin is forced to ditch the diamond inside a nearby woman's purse. They follow the couple home and discover wannabe dad Darryl Edwards (Shawn Wayans) and his overworked wife Vanessa (Kerry Washington). Calvin and Percy hatch a plot to pass Calvin off as a baby left on the couple's doorstep in order to retrieve the diamond. Calvin plays his way into the couple's life while laying off the suspicions of Vanessa's paranoid father Francis, aka "Pops" (John Witherspoon). Meanwhile, Walken (Chazz Palminteri), the mafia boss Calvin pulled the heist for, grows impatient.

(For the record, the trailer version of this scene is FAR more comedic than the final cut.)

Example of:
Frying Pan of Doom

(For the record, the trailer version of this scene is FAR more comedic than the final cut.)