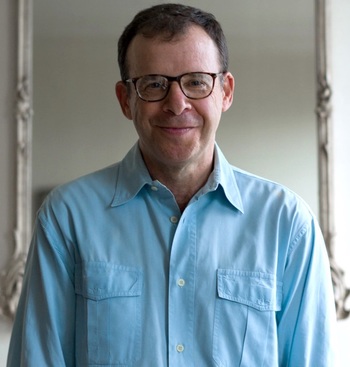 "I always find it flattering when somebody recognizes me."
Advertisement:

Frederick Alan "Rick" Moranis (born April 18, 1953) was born to a Jewish family in Toronto, Ontario. As a boy, he spent his summers at Camp New Moon, located in Baysville, Ontario, north of his native Toronto. During his last summer as a camper, Moranis achieved his Master Canoeist's award, qualifying him to teach canoeing.

After SCTV and its NBC continuation, SCTV Network 90, Rick ended up in a bunch of movies throughout the '80s and for over half of the '90s. During his career, he got married to an artist named Ann, and they had two kids, Ariel and Josh. In late 1990, Ann was diagnosed with liver cancer, prompting Rick to decline the offer of doing City Slickers in order to nurse her back to health. Sadly, she died 5 months later.

By 1997, he had become sick of the lackluster roles he was then taking, which were making him, in his own words, "a marketable entity," and was struggling with the impossible task of being a full-time actor and full-time single father, convincing him to semi-retire from acting. Since then, he's contributed the occasional witty article for the New York Times and voice-over for animated films.

In 2005, Rick also released a comedy album entitled The Agoraphobic Cowboy, which draws influence from country music. To his and everyone else's surprise, it was nominated for a Grammy Award. 8 years later in 2013, Rick made a comeback with My Mother's Brisket & Other Love Songs, an album based around his Jewish heritage. Special orders of the CD came with a purple yarmulke, similar to what Rick wore on the album cover.

that Rick is coming out of retirement after 24 years and 14 years after his last film (Brother Bear 2) for a reboot of Honey, I Shrunk The Kids. In September 2020, he appeared in a commercial

Some information can be found here