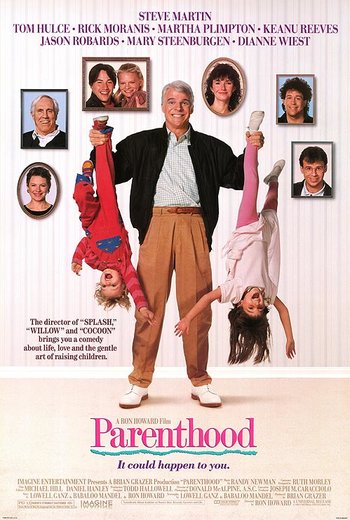 "You know, when I was nineteen, Grandpa took me on a roller coaster. Up, down, up, down. Oh, what a ride! I always wanted to go again. You know, it was just so interesting to me that a ride could make me so frightened, so scared, so sick, so excited, and so thrilled all together! Some didn't like it. They went on the merry-go-round. That just goes around. Nothing. I like the roller coaster. You get more out of it."
— Grandma
Advertisement:

The film follows Gil Buckman (Martin), a neurotic man who works as a sales executive. Though he is constantly busy with his job, he wants to spend more time with his three kids and be a better father to them, especially since his own dad, Frank (Robards), was distant and worked all the time. This soon gets worse as he finds out that his wife Karen (Steenburgen) is now pregnant with their fourth child. Gil becomes worried if he will be able to handle this. To top it off, Gil begins seriously questioning his parenting skills as his oldest son Kevin enters therapy and his other two kids have some emotional problems as well.

Gil ends up having to spend more time at work not only due to an expanding family, but also because of the office politics where he works. His siblings deal with their own issues as well: younger brother Larry (Tom Hulce) refuses to grow up, dumping his problems — and son — on their aging parents; Helen (Wiest) deals with her teenage daughter Julie's (Martha Plimpton) pregnancy and elopement with Tod (Reeves) and her son Garry's (Phoenix) abandonment issues; and Susan (Harley Kozak) deals with her husband Nathan (Moranis) and his harsh academic training of their preschool-aged daughter.

A big critical and commercial success, Parenthood was twice adapted to television, first in 1990 and then again in 2010.