Parents Walk In at the Worst Time 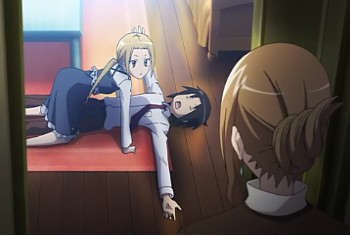 Now is not a good time, Mother.
Mrs. Pinderhughes: What was that noise, dear?
Mr. Pinderhughes: Oh nothing, honey. Just our son Duncan making it with some sexy babe in his room. Boy was she ...stacked! I'm just so proud of him.
— Class Act
Advertisement:

Some youngster over the age of understanding takes a friend to whom they might be sexually attracted to their room. At some point, one parent or both will inevitably find some reason to barge in and will do so.

This tends to play out in a couple of different ways:

Related to Moment Killer, Amazingly Embarrassing Parents, Caught with Your Pants Down. A subtrope of Interrupted Intimacy. For children walking in on their parents, see Primal Scene.