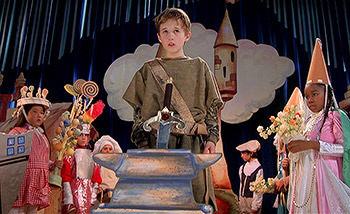 Amateur theater productions are the most realistic excuse to put characters in unusual costumes. If the play has any romantic overtones at all, the most important casting will not be arbitrary. For that matter, even if the play has no romantic overtones, the most important casting will not be arbitrary. Usually, people will get parts in the play that match their roles in the larger show, or this will be inverted and they will get parts that are horrible matches. The most hapless character will likely play an inanimate object. Either way, expect much Bad "Bad Acting" and Stylistic Suck.

In High School sitcoms, the play is usually Romeo and Juliet, with the main characters cast in the lead roles. This is especially likely in a She Is Not My Girlfriend situation. The balcony scene is always shown, and the specific line "Romeo, Romeo, wherefore art thou Romeo?" is always uttered. (Expect the writers not to realize that "wherefore" means "why" and not "where".) Once in a while, the main plot is a less-lethal parallel of the tragedy of the play. All this is probably because the general public knows only a handful of actual plays. Also, William Shakespeare plays are Public Domain and therefore are free to show.

The plot of these episodes usually revolves around the characters struggling to memorize their lines, trying to manoeuvre themselves into the lead roles, complaining/boasting about the roles they did get, or working up the confidence for a kiss scene. A common theme is One-Line Anxiety, where a character puts way too much importance on a comparatively minor role. This may be an egocentric character believing their bit part is the star of the show, or a less confident character dealing with Performance Anxiety about remembering a mere one or two lines.

Also, despite real life high school plays generally being extracurricular activities rather than required participation (as grade and middle school plays usually are), you can expect every major character on the show to have some kind of role (even ones who wouldn't logically have any interest in theater whatsoever). Expect at least one big, meaty lunk to suddenly find some talent for acting and be especially memorable in his role. Meanwhile, a more theatrically inclined character will probably come off as a Large Ham.

A School Play featuring younger children will most likely be the Nativity. Common tropes include a central character being cast as a Bit Character like "third shepherd" or, worse, an inanimate object, and resent the fact that the Alpha Bitch and The Ace got the starring roles as always. The Cheerful Child may get a solo speech at some point which will leave the audience overcome with Cuteness Overload. There is of course generally No Budget, so parents may have to make the costume themselves; expect shoddy Rummage Sale Rejects if Mom does it and mortifying awfulness if it's left up to Dad. The kids will stumble through their lines awkwardly, and at least one will either (a) cry, (b) wet themselves, or (c) throw up. Corpsing is likely to ensue.

Often a play (school or otherwise) will be such a disaster that the audience, usually including an important patron or theatre critic, will mistake it for a comedy, resulting in an unexpected success. If the badness is intentional in an attempt to get (back) at something, you may end up with Springtime for Hitler. The Law of Conservation of Detail dictates that things that go according to plan don't merit much of a story, and Finagle's Law promises that something will fail anyway, so The Show Must Go Wrong. Sometimes parents expect it to be so bad that they don't even bother going — compare Missed the Recital.

An episode of a show with a school play often will contain behavior on the part of the actors that will be particularly aggravating to actual high school performers, or at least those in drama club. Actions such as spontaneously altering lines and blocking, breaking character on stage, and totally abandoning the script will be treated as humorous and acceptable. In reality, any decent director would have the heads of an actor who intentionally did this since it is likely to throw off the rest of the cast and cause great damage to the performance...of course, the joke is that they don't have a decent director.

More than not Real Life averts this trope. School plays are often staged with help from or by community theaters. Professional child adaptions are used and while the actors are children the stagecraft is handled by adults, often including their parents and grandparents. As an example of how far this can go, both Mary Poppins Jr. and Peter Pan Jr. include rental of a wired flying harness as part of the licensing with Disney.

Depending on the genre, look out for All Part of the Show. Compare Amateur Film-Making Plot, where the characters put on a different type of show. Contrast Set Behind the Scenes, for stories about the making of professional plays or movies.

Subtrope of Show Within a Show.

It's the "Mothers and Primary Caregivers Appreciation Cabaret" at Wagstaff School and Bob fails to record his kids' terrible performance.

It's the "Mothers and Primary Caregivers Appreciation Cabaret" at Wagstaff School and Bob fails to record his kids' terrible performance.