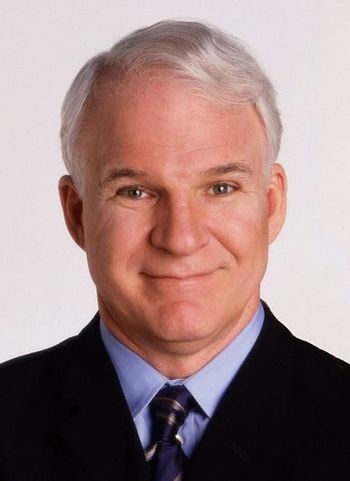 A wild and crazy guy.
"I loved to make people laugh in high school, and then I found I loved being on stage in front of people. I'm sure that's some kind of ego trip or a way to overcome shyness. I was very kind of shy and reserved, so there's a way to be on stage and be performing and balance your life out."
Advertisement:

Stephen Glenn Martin (born August 14, 1945) is an American comedian, author, and musician who first became famous as a writer for The Smothers Brothers Comedy Hour and as a frequent guest on The Tonight Show. After appearing on Saturday Night Live as a guest host, he quickly became (and still is) one of the most popular comedians in the United States. Since the 1980's, he has focused more on acting than stand-up comedy. Martin is also well known as an accomplished banjo player and would often play the instrument during stand-up comedy shows in the 1970s. He has released five albums of bluegrass music and he has won more Grammys as a musician than he has for his comedy albums. He has recently returned to touring, but instead of stand-up comedy, it's with the bluegrass band Steep Canyon Rangers.

He was never a cast member of SNL (a common misconception)—he was a cast member on Lorne Michaels' failed ABC prime-time sketch series The New Show, but was a frequent host on SNL (joining several other actors who have frequently hosted the show and are considered just as good as — if not better than — whoever the current cast members are, such as Alec Baldwin, John Goodman, Tom Hanks, Christopher Walken, Buck Henry, and Drew Barrymore). Martin has guest-hosted Saturday Night Live 15 times. When he made his 11th appearance in 1989, he surpassed Buck Henry as the most frequent host in the history of the show, a title he held for 22 years until Alec Baldwin overtook him in 2011 with 16. Martin still became very close with several of the cast members, including Gilda Radner. On the day Radner died from ovarian cancer in 1989, Martin was to host SNL; after introducing a video clip of him and Radner appearing in a 1978 sketch, he became overcome with grief and started to cry.

Martin is a surprisingly deep guy; he has a degree in philosophy. He has done a significant amount of writing, not only penning screenplays for some of his best movies (LA Story, Roxanne, Bowfinger) but also stage plays (Picasso at the Lapin Agile) and novellas (Shop Girl, The Pleasure of My Company.) He is also the owner of one of southern California's finest private collections of modern art—and it has been implied by many, including Martin, that expanding his collection is the motivation behind his taking such roles as Bringing Down the House and The Pink Panther.

Not to be confused with Dick Martin, co-host of Rowan & Martin's Laugh-In.

These days he’s mostly retired from acting to focus on his music. He doesn’t actively pursue any new roles but will take the right one should it come along. However, his most prominent role in recent years ended up coming from himself when he co-created Only Murders in the Building with John Hoffman alongside his longtime friend and previous costar Martin Short; the show is his first series regular gig.