Western Animation / The Prince of Egypt 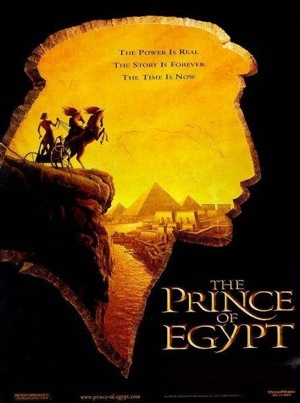 "The story of two men. One born to rule, the other destined to lead."
"Deliver us, hear our call,
Deliver us, Lord of all,
Remember us, here in this burning sand.
Deliver us, there's a land you promised us.
Deliver us to the promised land..."
Advertisement:

The Prince of Egypt is a 1998 animated film based on the biblical Book of Exodus, as well as the very first 2D animated film made by DreamWorks Animation. Until The Simpsons Movie came out in 2007, it was the highest-grossing traditionally animated film of all time not to be released by Disney.

The film covers part of the life of Moses, from his being found and adopted by Pharaoh's family to his young adulthood, where he discovers his Hebrew heritage, to his adult life, when God tells Moses to confront the current Pharaoh and persuade him to free the Hebrew slaves in Egypt.

The Prince of Egypt admits up front in a disclaimer that it takes liberties with the original story, but is nonetheless one of the more accurate retellings in cinema. The film has an All-Star Cast to voice its characters, including several of the smaller roles, and featured numerous musical numbers throughout. The film won considerable acclaim in its time, and even got an Oscar for the song "When You Believe".

A stage musical based on the movie debuted in 2017.