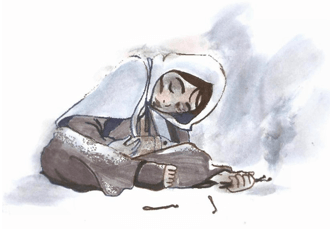 "Out, out, brief candle! Life's but a walking shadow, a poor player that struts and frets his hour upon the stage and is heard no more"
Advertisement:

The moment of death, the death of a person, the death of an age, the death of hope or of peace, marked by a candle going out. Flames have often been used to symbolize life, hope, enlightenment or even civilization, so an obvious metaphor for the end of such things is to show a literal flame going out. Other kinds of lights/illumination can be used, but the candle is the easiest to make the connection with as well as being the most poetically picturesque.

Compare Lights Off, Somebody Dies where someone turns off the lights to cover a murder. See also Death's Hourglass.

This is a Death Trope, so spoilers are unmarked. Proceed at your own risk.

Not to be confused with the video game Dying Light.