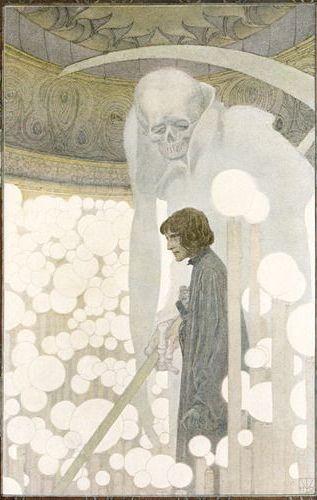 "Godfather Death" is a fairy tale with many variants, all built on the premise of a mortal gaining Death as a godfather. The best known variant is Der Gevatter Tod, collected by The Brothers Grimm in Children's and Household Tales (Kinder- und Hausmärchen) -Tale #44-.

A poor man with twelve children has his 13th child. As the man has already asked everyone suitable he knows to be godparents to his other children, finding a godfather for his newborn son is a serious problem. Eventually he resolves to ask random strangers on the road to be the child's godfather.

After encountering God and the Devil and rejecting them as godfathers, the poor man meets a stranger who says he is Death and would like to be his son's godfather. This time, the man accepts.

When the boy comes of age, the godfather visits and declares he is going to make his godson a famous physician. He shows him a magic herb and tells him that whenever he will visit a patient, he will see Death standing either at the head or the feet of the sick person: If Death stands at the head, the patient can be cured, but if he stands at the bed's foot end, death is certain. Armed with this knowledge, the godson becomes both famous and wealthy for his medical arts.

One day, the physician is called to cure the king. Death stands at the king's feet, but because the sick man is the king, the physician turns the bed around, so that Death comes to stand at the head. The trick works, and the king gets better. Seeing as it worked one time, the physician gets the idea it might work another time. But how long can even Death's godson afford to cheat his godfather?

. Different versions of the tale can be found here

In the Aarne–Thompson–Uther Index, it is a Type 332, Godfather Death.