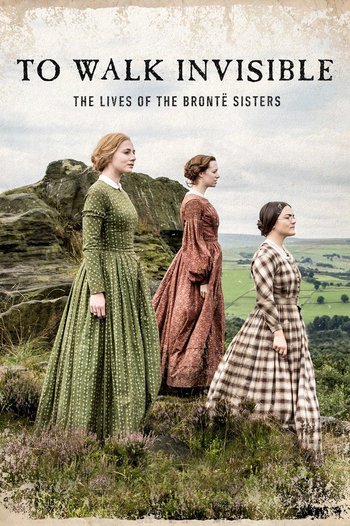 "If we're to be taken seriously and judged fairly and make anything resembling a profit, we must walk invisible."
Advertisement:

A British television Docudrama about the Brontë family, written and directed by Sally Wainwright. It aired on BBC One on 29 December 2016. In the United States, it aired on 26 March 2017 on PBS as part of Masterpiece Theatre, under the title To Walk Invisible: The Brontë Sisters.

The plot revolves around the lives of the Brontë family in 1840s Haworth, West Yorkshire, which was their home. Charlotte (Finn Atkins), Emily (Chloe Pirrie), and Anne Brontë (Charlie Murphy) decide to write novels and send them to publishers using pseudonyms. As they gain success, meanwhile, their brother Branwell (Adam Nagaitis)'s life is in a downward spiral of alcoholism and drug abuse.