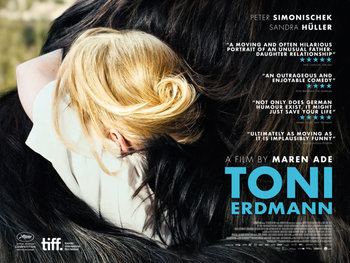 Toni Erdmann is a 2016 film directed by Maren Ade. It was a co-production of Germany and Austria.

Winfried Conradi is a music teacher who lives in Aachen. He is a cheerful boisterous fellow who likes to make jokes and has a penchant for wearing silly disguises, most frequently a garish set of false teeth. When his dog dies, a depressed Winifred goes off to Bucharest unannounced to see his semi-estranged daughter Ines.

It doesn't go well. Ines is a striking contrast to her shaggy, goofy father: she is a tightly-wound career woman. She's further stressed-out by the fact that her company, a consulting firm, is in the middle of negotiations to extend a contract with a Romanian oil company. Ines doesn't take it well when Winfried shows up at her place of business wearing the silly false teeth. She invites her father to a reception at the American embassy in Bucharest, but gets further irritated when he jokes about getting a replacement daughter because she's too busy.

Tensions boil over when Ines oversleeps, misses some phone calls, and unfairly blames her dad. Winfried, feeling unwelcome, leaves. But that night, as Ines is unwinding with some of her friends at a club, Winfred pops up again, wearing the false teeth and a black wig, identifying himself as "Toni Erdmann", a life coach. Ines grudgingly plays along as "Toni" follows her around, meeting her work friends, meeting her boyfriend Tim. Will father and daughter get past their issues and make peace with each other?