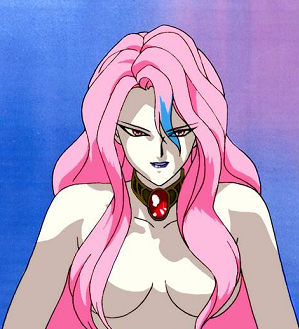 It's comfier than a bra.
"It was a mermaid. She was beautiful. Hair covering her breasts... every fucking time...."
— Rhys Darby
Advertisement:

A woman is topless or fully naked, and the writers don't want to (or can't) stick an object into the scene to cover her up. Fortunately, her hair is just long and thick enough to preserve her modesty.

A form of Scenery Censor. Related to the Theiss Titillation Theory (after all, what will happen if she turns her head just a bit too far, or the breeze picks up...?)

, a noblewoman who rode a horse through the city of Coventry to protest an oppressive tax. Legend says she rode naked: whether naked means "nude" or "stripped" in some metaphorical sense is academic, since most artistic representations show the lady garbed only in her flowing hair. Never mind that real Lady Godiva was, at the time of her alleged ride and taxes being lifted, quite an elderly woman by medieval standards.note On a side note, most of the citizens agreed to look away as she passed and not shame her; later, in a thematic painting, one man is shown stealing a look. This is the origin of the term "peeping Tom". Supposedly, he was struck blind for this.

Mermaids are depicted like this if the writer doesn't want to use a Seashell Bra.

The rare male example uses his facial hair to cover his naughty bits. (The sheer length of beard required generally restricts this use to old hermits or shipwrecked castaways.)

Not to be confused with Peek-a-Bangs. Often requires Rapunzel Hair. May combine with Hand-or-Object Underwear.

Alejandro relieves Elena of her night-dress with a few precise sword slashes without touching her skin.

Alejandro relieves Elena of her night-dress with a few precise sword slashes without touching her skin.