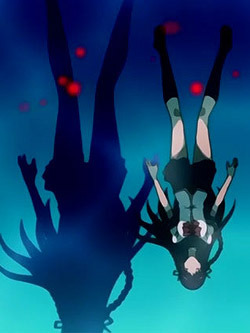 Do you think she's getting a headache?
Advertisement:

This is when a character's full-body portrait is shown, as commonly seen in Title Sequences, only they're upside-down. May also appear in other parts of a work as well.

Used for artistic effect or perhaps to symbolize something about the character, such as being in pain in strange ways, or in deep thought. Whether the character is really upside-down, or is lying on his or her back (or floating) and is merely seen from a perspective that puts their head down, is not necessarily clear.

Note that this only applies when the character is seen in a stylized portrait. Although it could appear anywhere within a work, if the character is literally floating upside-down within the story, it is not an example of this.