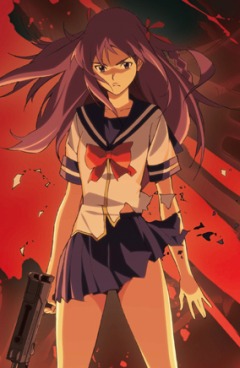 Makina Hoshimura is a Shikabane Hime — an undead girl who must earn her way into Heaven by tracking down and killing 108 Shikabane, monsters formed from the regrets of people who die violent deaths.

Things get complicated a year after she returns from the dead when Ouri, the adopted brother of her contracted monk, starts stumbling across her missions and taking an interest in the whole thing. Makina insists he doesn't get involved, but to no avail.

Meanwhile, a renegade monk is using Shikabane to fuel his own power and direct it towards evil...

American and Canadian distribution rights have been picked up by FUNimation. In a surprising move, the company has offered subtitled episodes for download from its website, and also placed them online on their YouTube channel

(even watchable outside the US!); when this proved popular, episodes were also made available from the company website

. The best part? These are completely legal, and unless you download, are also 100% free. Australians and New Zealanders can also watch the show's first two episodes for free, courtesy of its Antipodean distributor Madman Entertainment, by visiting the Madman Screening Room

No relation to Corpse Bride and Corpse Party.