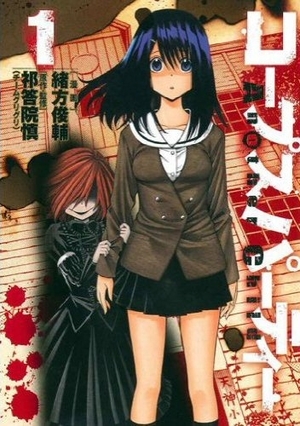 Life isn't going so well for Tamaki Minase. Her family's been struggling to make ends meet, which the local Alpha Bitch and her Girl Posse find hilarious. Their school's shutting down for good, and while she has to stay and look for a job, it seems like everyone else can afford to move on and transfer out... including her childhood friend and longtime crush, Yuuma. To make matters worse, he's going to be going to the same school as that girl—!

But... maybe this charm she found online could help. Supposedly, those who perform it together will form a bond that can never be broken, no matter how far apart they may be...

Unfortunately, Erina overhears and decides to invite their entire class to participate, just as one last dig at Tamaki. Unfortunately for everyone involved, the charm in question is the 'Sachiko Ever After', and when they attempt it, the ground opens up beneath them and dumps them into an old school campus. One that isn't as abandoned as it looks...

A Spinoff of Corpse Party: Blood Covered, Corpse Party: Another Child follows a different group of hapless students as they find themselves in Tenjin Elementary.