Manga / The Comic Artist and His Assistants 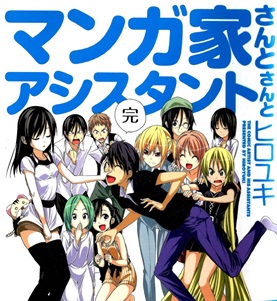 Aito Yuuki is a newcomer comic writer who has just started his own work. However, he is still new to conveying character expressions, so he frequently asks his long-suffering assistant, Ashisu Sahoto, to volunteer for this purpose, even as they frequently try to make their deadlines and keep their manga afloat. Except Aito has to learn to tone down his incredible perversions, forcing Ashisu and Otosuna Mihari, the editor of their manga, to try and keep his mind on the task.

The Comic Artist and his Assistants (Mangaka-san to Assistant-san to) is a 2008-2012 gag manga written and illustrated by Hiroyuki, published under Square Enix's Young Gangan manga anthology, with a 10-volume tankobon compilation. The series have also received an anime adaptation directed by Takeshi Furuta and released by Zexcs for the Spring 2014 Anime season and can be viewed on Crunchyroll here

The manga itself has received a 2013 sequel, which was sadly cancelled due to terrible sales.

The Comic Artist and his Assistants provides examples of the following tropes:

Alternative Title(s): The Comic Artist And His Assistants