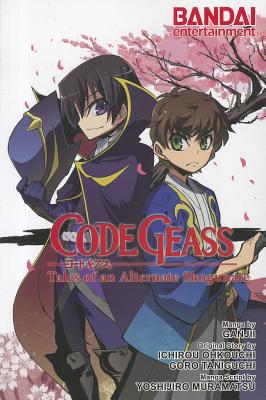 Code Geass: Tales of an Alternate Shogunate (Bakumatsu Ibunroku: Code Geass - Hangyaku no Lelouch) is a Code Geass Elseworld manga written by Ganji and illustrated by Yoshijiro Muramatsu. It ran for four chapters that were serialized in Kero-kero Ace from May to August 2008.

The year is 1853, Matthew Perry, using the power of Geass, forces Japan to open its ports to outsiders. Opposition arises in the form of the Black Knights, a resistance group that seeks to aid the oppressed citizens of Japan, led by the mysterious Zero. Meanwhile, Suzaku Kururugi, a low-ranking Samurai, tries to catch Zero despite the prejudice against him, not knowing that Zero's true identity is Lelouch Lamperouge, his friend who is head of the Shinsegumi. The introduction of the seventh-generation Knightmare Frame "Lancelot" has the potential to tip the balance of the conflict.