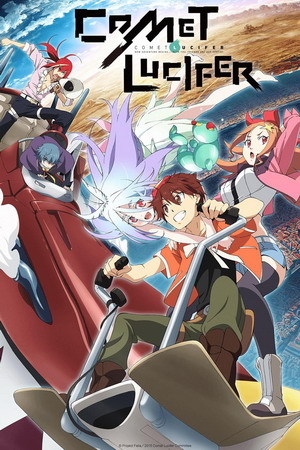 Comet Lucifer is an original anime created by 8bit (Aquarion Evol, Infinite Stratos) and written by Yuuichi Nomura (one of the writers for Eureka Seven) that aired as part of the Fall 2015 Anime season.

The story takes place in a fantasy world called Gift, which is home to powerful blue crystals called giftdium. A boy named Sougo hangs out in an abandoned giftdium mine, collecting rare crystals. One night, he is hit by a strange gem-shaped meteor. The following day, while out with his friend Kaon, the pair fall into an underground cavern and discover a lake surrounding a pillar of red crystal. The pillar reacts to the meteorite, and out pops Felia, a mysterious white-haired girl in a feathery dress. Who is Felia? Where did she come from? And why are the army seemingly after her?