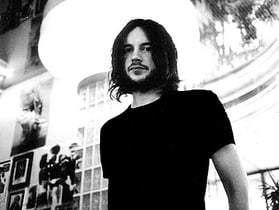 Chris Cunningham (born October 15, 1970) is a British filmmaker and video artist best known for his music videos, although he's also directed short films as well as commercials for household-name brands.

Although he started out working on film effects (including being personally recruited by Stanley Kubrick to work on the animatronics for A.I.: Artificial Intelligence after he saw his work on Judge Dredd), he's best known for his work directing music videos between the 1990s and early 2000s for electronic artists such as Aphex Twin, Autechre, Squarepusher, and Björk, while also directing for artists as far mainstream as Madonna.

Cunningham's visuals can often be identified by characteristics including graphic distortions of the human form, stylized lighting (often chiaroscuro or blue-tinted), equal use of Surreal Humor and Surreal Horror (sometimes at once), ample sci-fi influence, and advanced digital effects, with his video work often presented with meticulously synchronized and breakneck-pace editing. This style has been recognized for producing some of the most groundbreaking, bizarre, disturbing, and overall memorable music videos to come out around the Turn of the Millennium.

In the year 2000, he began work with William Gibson on a film adaptation of his novel Neuromancer that remains unlikely. (While the adaptation has since gone through several sets of hands, Gibson has stated that he believes Cunningham is the only director that could possibly do the novel justice.)

Throughout that decade, he designed artwork, directed several photoshoots, took an interest in producing music, and started playing a brand new three-screen audiovisual piece named Chris Cunningham Live at various shows, mixing original and new versions of music and film associated with him.

While he originally planned on making features for Warp Films, he has since started an independent production company called CC Co.

Short films, commercials, and other works of note

Tropes applicable to Cunningham's work include: