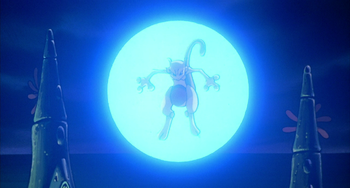 "Behold my powers! I am the strongest Pokémon in the world."
So, your Player Character just got an Invincibility Power-Up, your anime hero unlocked a Super Mode, or your essay is due in an hour and you drink a Red Bull. How do you represent the sudden increase in power? With circles and spheres.
Advertisement:

It can be in the form of a debris cloud that envelops the character, a Chunky Updraft that circles the character like electrons around an atom, a full-body halo that radiates from him, a barrier of any stripe, a cyclone spiraling upwards, or maybe Instant Runes following the character around like a celestial spotlight. Point is, it's got circles and therefore it must be powerful.

This is possibly because a circle (in 2D) and sphere (in 3D) are the shapes any equally distributed outward pressure will form.

Not to be confused with the Sphere of Destruction, although the two often do overlap, or the alternate magic system Sourcebook Spheres of Power, though you could build one with those rules. Compare Orbiting Particle Shield.