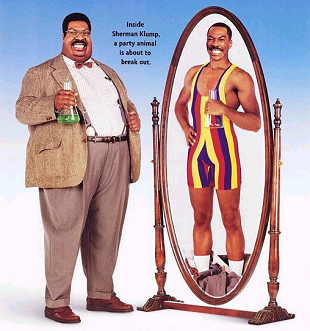 This trope is for characters of any gender that have an alternate form or identity that is much sexier than their normal mode. It's not necessarily because their "civilian" mode is ugly, but it is generally more mundane or otherwise less appealing than their "heroic" mode. Depending on the genre, the changes can be accomplished through either regular means such as acting and swapping wardrobes or though various magical or phlebotinum-driven methods. This usually involves a change in a character's physical appearance, but sometimes it's purely a change in personality traits and behavior, suggesting that the character in question is deliberately making themselves appear unattractive to hide their Secret Identity.

Naturally, it often results in Loves My Alter Ego.

Given that sexual attractiveness is subjective, the best examples are those when the sexier nature of the alternate form is shown from the perspective of another character reacting to them with subtle flirting and innuendo that otherwise wouldn't be present. That said, it's generally pretty clear when the creators of the story are trying to change someone from Hollywood Homely (or even downright ugly) into Ms. Fanservice or a Head-Turning Beauty.

Compare A Darker Me. Compare also to Shapeshifting Seducer where a shapeshifter capable of assuming many forms takes on several in an attempt to appeal to a specific person. She Cleans Up Nicely should be used for when a character changes from their usually dull or unattractive wardrobe, hairstyle and such to be more attractive (particularly at a formal event) however this new appearance is not associated with an alter ego or alternate physical form. Also see Evil Is Sexy.

See also Bishounen Line for when a monstrous character gets sexier once they hit a certain power level, and With Great Power Comes Great Hotness when they get more attractive with power in general.

Jen teaches Johnny to not judge a book by its cover.

Jen teaches Johnny to not judge a book by its cover.