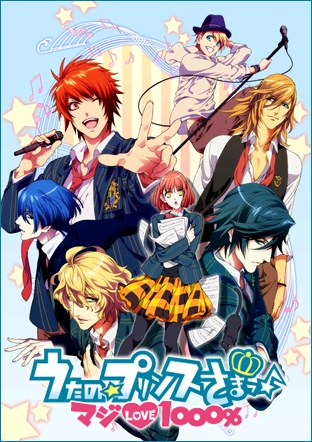 Upon being captivated by a song she heard while crossing the Shibuya intersection, Country Mouse Nanami Haruka dreams to become a composer so she can someday write a song for the idol who touched her heart, Hayato.

Despite her poor health, she enters Saotome Academy, a prestigious performing arts school, where she enrolls in the composer course. If she's able to graduate, she'll be able to join the Shining Agency as a composer after graduation. However, it isn't an easy task. The gorgeous yet eccentric school is filled with celebrities and potential celebrities; her homeroom teacher is a popular idol and the headmaster was a record-breaking singer.

On her journey to become a successful composer, she meets six men and forges bonds with them, one of which is the younger brother of Hayato. To graduate from the academy, two students are to be teamed up by choice: one from the idol course, one from the producer course, and these two students will perform a song that was composed, written, and sung by them. A successful pair will take the spot as the new Shining Agency debut artists. In addition, romance is strictly prohibited at their school. Just who will Haruka pick?

Uta no☆Prince-sama♪ Maji LOVE is the anime adaptation of the game Uta no Prince-sama, produced by A-1 Pictures. The list goes as follows:

Moving away from television and plot, the anime franchise began to put out concert movies. The first of these featuring all three major idol groups, Maji LOVE Kingdom, was announced shortly after the fourth season aired and was released in 2019. 2022 saw to a follow up film, Maji LOVE ST☆RISH Tours, this time only focusing on a ST☆RISH concert. A one hour special taking place just before Tours aired in the interim.

It should be noted that despite many similarities with the original visual novel continuity, the Maji LOVE anime is a very different beast; while there are still some magical elements, the story as a whole is more grounded and yet very over the top in execution. It's overall more lighthearted as well.

The page for the character sheet is here. The tropes exclusive to the games are here, while the tropes found in the whole franchise are here. Tropes related to Shining Live can be found here.

Uta no Prince-sama provides examples of: