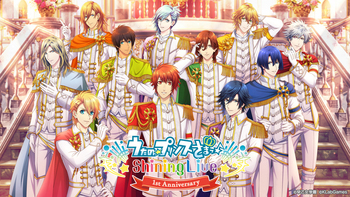 The gameplay is very much like its predecessor Love Live! School Idol Festival, but it introduces completely new features as well as a different interface. Advertised as the app which let's you bring your "Uta no Prince-sama guys wherever you go", this game is a fusion of a Visual Novel and a Rhythm Game, where you can interact with the characters by touching them on screen, change their costumes and backgrounds, unlock their interactions with other characters, and read stories about the idols' lives onstage/onscreen or behind-the-scenes. These may trigger motions, actions, and even fully-voiced dialogue. The game uses Live2D models of the characters.

The game's core gameplay revolves around the player's team of 7 idols (which can be composed of members of STARISH and QUARTET NIGHT) performing a live show onstage. The live show can either feature images of the player's team or the music video of a song, with notes spawning from the top of the screen towards six circles arranged at the bottom of the screen. The player must hit their corresponding icons when the notes overlap to score points. The live show is cleared when the player reaches the end of the song with HP remaining, and failed if you run out.

Unlike Love Live! School Idol Festival, though, there are three types of stats and three attributes. The attributes are Shine (a pink sun), Star (a yellow star), and Dream (a blue moon). The stat types are Dance, Vocal, and Charm. Each song is aligned with one of those three attributes, and the maximum value for hitting a note depends on the song's Attribute and how much value each member has in that attribute.

Though there are a maximum of eleven characters in the game, you can collect different cards for each member and even put these cards in the same team. Member scouting is done through "Photo Shoots", which work like a gacha system. This system uses Prisms, which can be earned through gameplay, reading stories, or event participation. To level up members, the player can use "Lesson" to have one member earn experience points with the help of other members or through experience boosts. A member can also undergo a "Special Lesson" with a copy of that member, raising his level roof, score potential and game stats. "Moments" allow players to unlock tiles that correspond to a stat boost or unlocking of a story or costume, provided you have the needed amount of stones, which you can earn through gameplay.