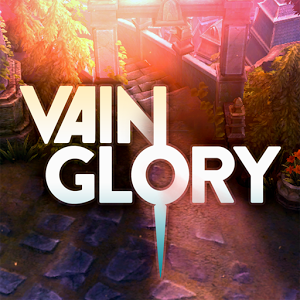 Welcome to the Halcyon Fold.
Advertisement:

Vainglory is a Multiplayer Online Battle Arena game exclusively developed by Super Evil Megacorp for the iOS and Android platforms. Vainglory was first released on the iOS in 2014, and was also released on Android a year later.

The game's objective is standard fare for a MOBA: two teams fight to push waves of infinitely-spawning minions down a lane to destroy turrets, control map objectives, accumulate gold with which to buy items that boost their stats, and ultimately destroy the enemy Vain Crystal. Players issue orders to their heroes by tapping locations or buttons on the screen in place of the mouse and keyboard inputs used by similar PC games. To account for the unique characteristics of the mobile platform, there are only three players per team, and one lane on a map that runs alongside a jungle. Each hero has three abilities and one passive effect (a "heroic perk"), and the GUI is designed to account for limited screen space.

The game also shares features present in well-known MOBA games, particularly League of Legends. Players can only use a limited roster of all the heroes present in the game, which is reset after a certain period of time, but they can unlock heroes permanently through an in-game currency called Glory, which is earned after playing a match, or through a premium currency called ICE (Immensely Concentrated Evil), which can be bought with real-world money or may be earned in random item drops after matches or in daily gift boxes. Heroes can also be customized by purchasing skins with ICE, or by purchasing cards, which are the ingredients necessary to creating hero skins, with Glory or ICE. Recent updates also introduced Opals, a special form of in-game currency that players can use to purchase hero skins without the need to purchase cards.

Aside from AI practice matches, the other online match modes are:

Standard mode also has two sub-modes: Casual and Ranked. Casual matches are just that; players are rewarded Glory, their victories are recorded, but there is no rank progression. Ranked matches introduce rank progression through several tiers, each with Bronze, Silver, and Gold divisions.

The biggest update to the game, update 2.0.2 (referred within the community as Update 2.0), aside from introducing a new hero (Idris), also introduced several changes to the game:

1. For Standard matches, the following changes were implemented:

4. Team positions and hero roles have also been revamped. Prior to Update 2.0, each team member could choose from the following positions: lane, roam, or jungle. Hero roles were also differentiated into four categories: Assassin, Mage, Warrior, and Protector. In the current update, players may only choose from the following roles: Carry (players who are expected to make the crucial moves that will bring victory to their team), Captain (players who are expected to protect their Carry as well as to fulfill the same roles a Protector used to prior to the update), and Jungle (players who focus more on accumulating gold and EXP in the jungle, as well as harassing the enemy Carry and making occasional forays into enemy territory to steal objectives or kill enemy heroes).

Has a character page under construction. Contributions will be most welcome.

Vainglory provides examples of the following: