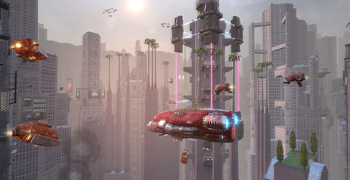 Urban Galaxy is a free online MMORPG, set in Anassin of the Dual Solar Empire. The gameplay opportunities change with every action the player takes. It is a futuristic urban-set Sci-Fi game, released in 2014. The backstory of the player arriving in Anassin is basic: get ahead in the city where local and galactic powers are working to rid it of crime. There is no linear storyline, the player deciding their own journey (obvious within limits, like having to be in a gang). It also implements permadeath — but being a free and open RPG, this isn't as terrible as it could be.