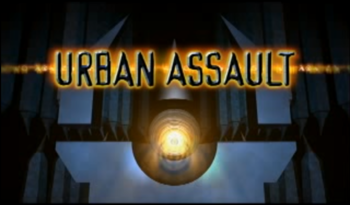 Urban Assault is a 1998 RTS/FPS hybrid created by a German company Terratools, published by Microsoft.

In its backstory, the ozone layer has depleted, which caused pythoplanktons in the ocean to generate toxins as a defense mechanism against unfiltered solar radiation, effectively ruining the food chain and leads to a global environmental hazard. Eventually, the planet Earth has been polluted to the point of being almost uninhabitable, and the survivors have been subjected into energy domed cities which filters radiation and contamination from the outside world. Meanwhile, the remaining humans have splintered into rivaling factions, and the planet has been invaded by aliens set on claiming the planet for themselves.

The player controls a member of the Resistance, who is cybernetically wired into the faction's remaining hardware, creating a gigantic factory/airborne battlestation known as a Host Station. The ultimate goal is to fight from the Resistance's territory, Great Britain, towards the Eastern Europe, where the Mykonian "Parasite Machine" drains energy from the Earth's core, accelerating the deterioration of the planet and attracting even more aliens, the biological Sulgogars. Each mission is equivalent to attacking a region. Completion of each mission requires capturing key sectors and advancing on the next region, but often the implied objective is the destruction of all hostile host stations in each region.

While the player can construct units, as in any Real-Time Strategy, the player can take control of any constructed unit at any point, granting it improved shielding and weapons in the process. These vehicles are always controlled from a first person view, hence possessing the First Person Shooter element.

There were originally plans to release a expansion pack named Metropolis Dawn, allowing the player to take the role of either the Ghorkovs or the Taerkastens (Existing game data seems to suggest that a campaign for the Mykonians was in the plans too). A contract issue between its new publisher prevented it getting an official release. However, a complete version was leaked to the internet community around a few years after the game was originally released.

The game could be considered a Cult Classic these days, with more and more people discovering its uniqueness. The largest community can be found at the Stoudson Corporation forums and its affiliated Discord