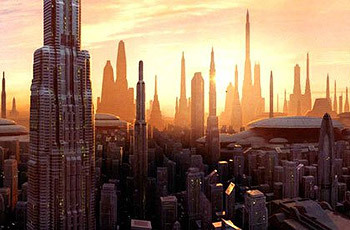 Excuse me sir, do you know where I could find the ground?
"New York is vertical — all skyscrapers."
— Tony Scott
Advertisement:

In a fictional and futuristic world, there is a certain way to show a city's prosperity and ambition: build it high. The city will contain almost or even literally nothing but buildings that dwarf the Burj Khalifa. The issue of these towers' financial cost, environmental impact or mere usefulness will never be brought up. Nor will be the question of how many people the city must have to need such huge buildings. There are freaking big towers everywhere, that means you are in an absurdly rich city, that's all you need to know.

If the issue of population is brought up, it will usually be in a dystopian setting where overpopulation plagues the planet or at least big cities, with the juxtaposition between the lower areas of town and the rich in their towers serving as a contrast between rich and poor.

A Skyscraper City may also be designed to give the viewers a "dreamy" feel by having the inhabitants evolving near or above the clouds. Or simply to give them a feeling of gigantism that disrupts their sense of proportions.

Common in Cyberpunk settings, and a Sub-Trope of Mega City. Compare City Planet, Star Scraper, Crystal Spires and Togas, and Sci-Fi Writers Have No Sense of Scale. Layered Metropolis is a subtrope. Not to be confused with a Hive City, which is a city comprised of only one building.