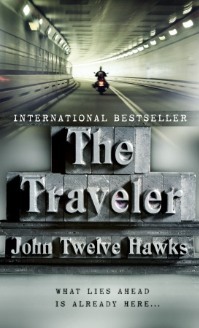 The Fourth Realm is a dystopian science fiction/fantasy/thriller trilogy by John Twelve Hawks, consisting of The Traveler, The Dark River and The Golden City. The plot revolves around Gabriel and Michael, two brothers who discover that they are the last Travelers: a group of people throughout history who have the ability to travel between different dimensions, or “realms”, of which our world is the fourth one. Using the insights they gain on these journeys, they inspire people and keep the fight for freedom alive against those who want to enslave the people, a mysterious organization known as the Brethren or Tabula, who pull the strings behind the scenes to create a virtual panopticon, in which everyone is always observed. Protecting the Travelers is a group of people called Harlequins, of which Maya, who is protecting the brothers is a member, spurred into action by the death of her father.
Advertisement:

Just as interesting as the story within the books is that of its author. No one knows who John Twelve Hawks really is and even his editor has never seen him face to face. He lives off the grid and lives by the message he preaches in his books.

The Fourth Realm provides examples of: