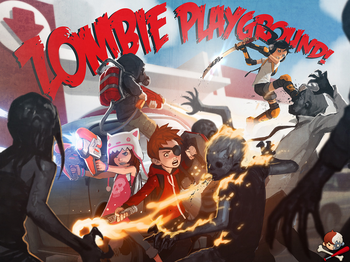 Zombie Playground is an Action Arena Game by Stealth.gg.
Advertisement:

Once again, the zombie apocalypse has happened, and the undead are all over the place. Who do you play as? Some spec-ops guy who has to mop up the mess? Nope. Some lucky survivor who now has to find a safe way out of the city? Nope.

That's right, kids are mowing down zombies in THIS apocalypse. Customize their appearance, outfit them with whatever you like, give them a pet if you wish, and then it's off to school to spend a productive day mowing down hoards of undead. And hey, they don't have to do it alone. Team up with friends online so they can join in on the action.