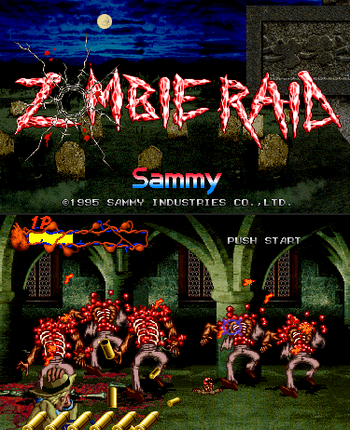 The title screen, and some gameplay.
"This night reminds me of the nightmare...a small village had a major catastrophe. Robbing graveyards and kidnappings occurred every night. And there was a villager who saw a horrific monster. Even the police found this unstoppable. My name is Edward Windsor. I'm a miserable detective. When I was approached about this case, I was uninterested in such ridiculous monster-hunting. But I was pressed for money and took the job reluctantly..."
—Edward Windsor, providing the synopsis of the game in the title crawl.
Advertisement:

A 1995 arcade Light Gun Game by Sammy Industries, which tells a grim and bloody horror tale. A village in 1918 England is being terrorized by the lord of a nearby castle, who has been robbing graves and abducting innocent people. Anyone who's taken back to his lair is never heard from again, and rumors abound that ungodly experiments are unfolding within the castle's musty halls. Further fueling these rumors are sightings of horrific monsters, and corpses that have come back to life. The local authorities are powerless to stop the twisted madman's experiments, and it seems nothing can stand between him and a world filled with ghouls.

Enter Edward Windsor, a private detective who's down on his luck. Despite having little interest in getting caught up in something as insane as monster-hunting, he takes the case for the sake of a much-needed paycheck. What follows is perhaps the most harrowing night of his life—armed with a pump-action shotgun, Edward must battle legions of undead monsters as he hunts them back to their source, wading his way through a knee-deep flood of terrors beyond anything he could have ever imagined...

This game is especially noteworthy for excellent (if bloody) hand-drawn visuals, Everything Trying to Kill You, and difficulty of both the cheap kind and the challenging kind.