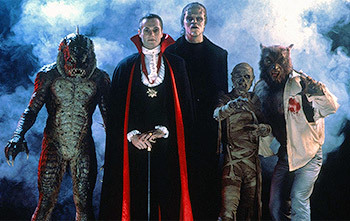 It's a graveyard smash!
The zombies were having fun
The party had just begun
The guests included Wolf Man
Dracula and his son
The scene was rockin', all were digging the sounds
Igor on chains, backed by his baying hounds
The coffin-bangers were about to arrive
With their vocal group, the Crypt-Kicker Five
— Bobby "Boris" Pickett and the Crypt-Kickers, "The Monster Mash"
Advertisement:

Hey, wouldn't it be cool if Dracula (or another Classical Movie Vampire), the Wolf Man, the Mummy, Frankenstein's Monster, Gillman, and all those other classic monsters hung out?

Short answer: Yes. Yes, it would.

This is prevalent in a setting where the heroes live on World of Weirdness as part of a Fantasy Kitchen Sink with a sprawling Crossover Cosmology, especially if they themselves are supernatural. The creatures, rather than become shut-ins, never leaving their designated niche or dark corner of the world... socialize. The Vampires and Werewolves, though antagonistic, agree to hold up a mutual Masquerade against humans. Fairies and ghosts work together to scare local homeowners. And the wizards work with all of them to Save Both Worlds.

This is a common subtrope of Cast of Expies, where many characters in a specific work are lifted from earlier works.

On a personal level, individuals of these groups might form loose bands (of Player Characters, usually) that work towards common goals, hang out, or terrorize humans for fun and profit. Or, if the setting permits, are all in on a secret, ancient conspiracy to control, manipulate, or convert humanity, eventually taking over and enslaving us all! Bla-hahahaha!

Named after a song by Bobby "Boris" Pickett and the Crypt-Kickers (quoted above) in 1962 that became famous after being played on Dr. Demento's show; the song was later the basis for a mid-1990s comedy-horror musical titled Monster Mash: The Movie which starred Pickett as Dr. Frankenstein. Not to be confused with Monster Munch.

You can expect all this canoodling to result in a Hybrid Monster sooner or later.

A Sub-Trope of Massive Multiplayer Crossover. Super-Trope to All-Ghouls School, where the monsters (either the younger versions of them or their children) all go to school together. They are often the citizens of a Halloweentown. If they're related to each other, they may be a Creepy Family.

Jimmy invents a machine to turn anyone into famous monsters, like the Wolfman and Dracula.

Jimmy invents a machine to turn anyone into famous monsters, like the Wolfman and Dracula.