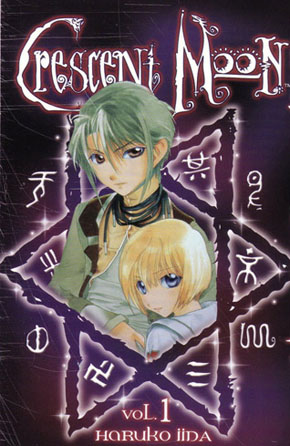 Crescent Moon (未完の月 Mikan no Tsuki) is a shōjo manga by Haruko Iida and Takamura Matsuda, which ran in Asuka from 1999 to 2001. The story is about a high school girl named Mahiru Shiraishi, who has the ability to grant others good fortune by touching them. She herself does not benefit from this good fortune, and occasionally laments that this is because she has given all of her luck away to others.

One day, Mahiru finds herself approached by four mysterious youths. The youths are not human, but are members of a supernatural race called "People of the Moon" or the "Lunar Race." The four are the vampire Nozomu, the werewolf Akira, the kitsune Misoka, and the tengu Mitsuru. Together, the four form a band of thieves called the Moonlight Bandits. The Moonlight Bandits steal gems known as Teardrops of the Moon, which the Lunar Race can use as a source of power. The Lunar Race is dying off, and hopes to use the Teardrops to preserve themselves.

Mahiru learns that she is the "Descendant of the Princess", and that her ancestors were responsible for stealing the Teardrops of the Moon from the Lunar Race. She has special powers that allow her to locate the Teardrops of the Moon, as well as the ability to draw out and enhance the abilities and powers of the Lunar Race. Though at first she is hesitant to assist the Moonlight Bandits, a desire to learn more about her powers convinces her to assist them. She moves in with them at the night club where they worked, named Moonshine.

The Moonlight Bandit's thefts put them into conflict with the police with police inspector Kimiteru Kusakabe, who has dedicated himself to catching them. They also come into conflict with an ancient order of magic-using humans called Dawn's Venus, which is dedicated to the destruction of the Lunar Race.