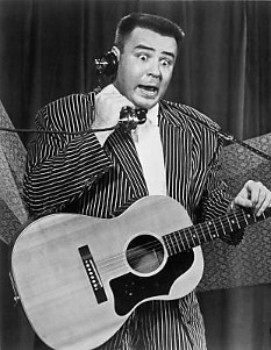 Jiles Perry "J. P." Richardson Jr. (October 24, 1930 – February 3, 1959), known as The Big Bopper, is best remembered for his 1958 Signature Song "Chantilly Lace" and the fact that, together with Buddy Holly and Ritchie Valens, he was one of three Rock & Roll musicians who died in the tragic plane crash that went in history as "The Day The Music Died", a nickname coined by American Pie by Don McLean.

Richardson was a radio disk jockey from Texas who had given himself the on-air name "The Big Bopper" after his daily rock 'n' roll show "The Bop" and his big, burly frame. He quit the radio business in 1958 and recorded "Chantilly Lace" that year.

Of all the Rock & Roll musicians who died that day The Big Bopper is always the easiest forgotten. "Chantilly Lace" was his only hit song, making him a One-Hit Wonder, and even that song isn't as well known as Buddy Holly's hit catalogue or Ritchie Valens' "La Bamba" and "Donna". The man originally started his career as a songwriter. "White Lightning" was George Jones' first # 1 country hit in 1959. He also wrote "Running Bear" for Johnny Preston, which became a hit in 1960 and provided the background chanting.